THE FOUNDATION to the rear of Casa Blanca was now in place.  From July 1988 there is no comment in the Society’s Minutes for five months until the final Committee meeting in December.

The current President, Glenys Searancke who had a firm grasp of the situation as it stood, told the meeting that the Society was struggling to get the money needed to finish the roof for the extension.  Her suggestion was that they should borrow $24,000.  With repayments at $300 per month and ridding themselves of the garages used to store materials, they could save money.
Ken Corbett suggested that this should be deferred until after the run of “The Sound of Music” which was to be produced in May 1989.

This is the theatre, the show must go on!  “Noises Off” was staged in July and August, with the cast crammed into the make-shift dressing room at the rear of the building.  “Salute to Broadway” wowed the delighted diners during November and December with its rounded stage and talented cast.  The Christmas break came and went and the 1989 AGM was informed of what had been achieved so far.

14th March 1989. Building Management meeting.
This was a general catch-up on progress so far.   Jack Smale had donated a steel door and surround for the back wall.  Tom Schraa had roofing estimates.  Amalgamated Roofing was the cheaper of the two.  This company would cut and cart the lengths for us and fitting and labour was included in the price of $13,000 approximately.  Steel prices were also obtained and there was discovered a difference of $900.  On looking further it was noted that one quote had not included crane hire.  Greg Brimmer, Terry Wood, Barry Burlace and Don Blackledge were all to seek further information from various other companies. There was a revised look at the plans as to where to place Wardrobe, Dressing room, toilets and other areas in the new space.

It was decided that positive construction of the back wall should begin in the hope that Merv Gray would get moving on his side.   Mr Gray was the neighbour on the left hand side of Casa Blanca and there had been an approach to him with the proposal to construct a party wall between our two buildings.  The request that we should tie our building to his was not greeted with enthusiasm.   In fact this was an on-going problem for almost a year with
Mr Gray being somewhat elusive.

In the meantime we were still hoping for news from Q.E.II Arts Council on the loan application.  Tom Schraa assured the meeting that there were no further debts, everything was ours.

Most of 1989 was spent on pricing, gathering of materials and waiting for a resolution with Mr Gray. The firm of Harris Heating Holdings Ltd were engaged to supply and erect steel portals. By December Mr Gray understood that we must go ahead with the building.

At a special meeting of the Committee, after a full discussion, it was suggested that Peter Pennell should be approached to supervise the timber framing and he was invited to the next meeting of the Management and Building sub-committees.   From here on under his guidance work started to progress well.  Professionals were engaged to lay the bricks to build walls which were to be
20metres in height. Peter then made a start on the roofing and timber walls. 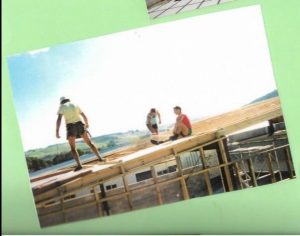 He called for as many men as he could from the Society to help with manual jobs.  They responded splendidly and over the summer months of 1990 work proceeded well.  The firm of Kelly, Brown and Spurr were brought in to check on the steel work and they reported that all was satisfactory.   In April Martin Harris reported that the building was 90% complete.

Stage I, the foundations and stage II, the shell now completed it was agreed by the Executive Committee to go ahead with the internal steel structure followed by the construction of the new dressing room and the lower toilet block – provided that funds were available. In June Martin Harris was able to report that the work had commenced.  There was a discussion on the need for forward planning and an estimation of what would be needed to complete such work.  But in August building had stopped due to lack of funds which was an ongoing problem for the Society.  The toilets were functional, as was the new dressing room. However, the cast of “After the Crash” would continue to use the old lean-to dressing room.  October saw the removal of the old lean-to and a working bee was arranged to paint the new room on Sunday 14th October.

The cast of “The Casa Blanca Christmas Special” were the first to use the new facility.  Although it was on the same level as the stage it was connected by a narrow walk way.  The Props department had to line up on another walk way at the back of the stage overlooking a drop of 10FT or more to the floor below.   OSH would have had a field day if it had existed in those days.   Eventually of course the stage was extended to meet up with the dressing room.

Further work was carried out in fits and starts with a wardrobe put into place and a fly floor mezzanine constructed.  There was much discussion over the next two or three years with a new plan drawn up by Peter Pennell to show how the final layout of Casa Blanca would look on all three levels.  By the end of December 1993 into January 1994 Peter and his band of willing workers are shown knocking down the last walls of the old building to finally open up the extension of Casa Blanca Theatre.

An orchestra pit was also constructed over this period as audiences had complained that they could not see the stage through the piano on the auditorium floor. This still exists under the front of the present stage.

In February the Management Committee recommended that work be continued to complete the stage as necessary to be able to present “La Cage Aux Folles”.  On 9th April 1994 the show opened to a highly successful season with the orchestra pit complete with carpet and electricity.

Peter Pennell reported to the Executive Committee that the estimate for the completion of Casa Blanca build was approximately $70,000.00.   Up to this point we had spent $20,000.00 and the work would be 70% complete.

Essentially Casa Blanca had now been enlarged and improved upon to become the theatre we know today.  Of course over the next few years modifications have taken place.  New levels have been installed in the auditorium so that patrons can see the stage more easily.  Lighting and sound boxes have been erected and sometimes re-located.   Many hours of work have been donated by members of the Society, some being professionals in their trades and others being willing helpers.

What a Society we have.  Well done us. 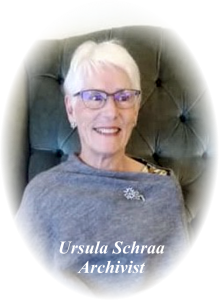